Nonprofit recognizes unsung black leaders who help others to live, own, vote, and excel

MIAMI, June 16, 2022 /PRNewswire/ -- As the Juneteenth holiday celebration of Black culture approaches, nonprofit BMe Community announces awards to 23 remarkable Black leaders whom they call BMe Vanguards. The award is given to Black people whose service and leadership have earned them the respect and trust of their communities. Each awardee is admitted into an advanced leadership program and receives a $10,000 grant to further the work they are doing in their communities.

BMe Community strikes a novel yet effective tone on racial and social progress.

Through its Vanguard Program, BMe Community equips awardees to lead from narratives of Black aspirations rather than degradations. It also provides them access to expert knowledge and networks, in addition to the grants which total $230,000, to advance their life-changing work.

"The BMe Vanguard are taught to define Black people and all people by their aspirations and contributions rather than by degradations and disparities," said BMe Community Founder and CEO, Trabian Shorters. "We don't ignore what's wrong with situations, but we start with what's right with the people. Then we build their freedoms to live, own, vote, and excel. That's how we build equity without stigma."

BMe Community strikes a novel yet effective tone on racial and social progress.

The commitment to defining people by aspirations and contributions is known as "Asset-Framing". Its practitioners report that it helps them to raise more money, have bigger policy impacts, and gain greater public support than traditional approaches.

"We're all different," said 2022 BMe Vanguard Anton Horton, Dean of Culture at University Prep in Detroit. "We all come from different places, but the one thing that makes us alike is that we're here to change the world as Black people for Black people." And that creates a better society for everyone.

The 2022 BMe Vanguard awardees join 400 previous winners whose work with hundreds of organizations help millions of families to live healthier, more fulfilling lives; own and build wealth; secure their voting rights, and achieve their full potential. This inspired community of Black leaders hail from the business, education, public policy, culture, and social impact fields. They were chosen for their authenticity, positivity, effectiveness, and the trust they've earned with their peers and in the communities they serve.

The 2022 BMe Vanguard award and program are funded by the NBA Foundation, Skillman Foundation and the Jacob and Valeria Langeloth Foundation.

Juneteenth, also known as "Freedom Day", celebrates the end of slavery in the United States and is observed annually on June 19th.

BMe Community is a network of leaders and allies who give their talents, knowledge, and skills to support Black people in achieving their highest aspirations for the good of everyone in society. It operates leadership and partnership programs such as the BMe Vanguard Awards and Allies For Equity.  Through its Asset-Framing initiative, it also offers field-leading training, support and engagement opportunities for foundations and social impact organizations that want to help build equity without stigma.

Join BMe Community in its efforts to help Black people everywhere Live, Own, Vote, and Excel (L.O.V.E.) for the benefit of everyone, by taking the Black L.O.V.E. pledge at www.BlackLOVEPledge.org.

To learn more about BMe Community, its work, and most recent BMe Vanguard honorees, visit its website at BMeCommunity.org. 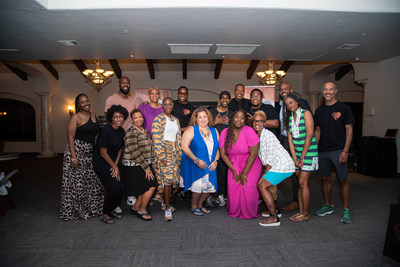