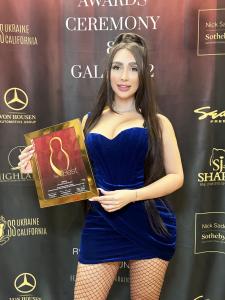 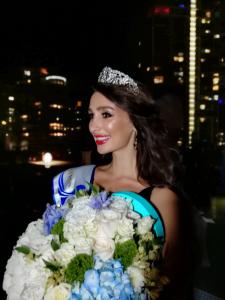 SACRAMENTO, CALIFORNIA, UNITED STATES, November 29, 2022 /EINPresswire.com/ -- Nina Senko, popularly known by the stage name Ninelle, has announced plans to drop a new album and she has used a unique, grand way to make the announcement by performing her new song titled Adios (Produced By UnorthodoxX) at The Best by Russian-Speaking Community Business Awards Ceremony, where she was recognized and awarded as an emerging artist. Ninelle has undoubtedly shown her talent in several positions in the entertainment industry. She was invited by the Best by Russian-Speaking Community Business Awards as a jury member after winning a famous beauty contest Miss Sapphire beauty pageant, in 2018. Now Ninelle is focusing on her music career.

The music industry continues to evolve, featuring different categories of stakeholders bringing their creatvity and ingenuity to the fore to deliver an amazing listening experience to the audience. Over the years, the line between the music world and other industries has become blurrier. Consequently, it is not surprising that Ninelle is making a switch from being an award winner at a beauty pageant to becoming an entertainer seIng stages on fire across the globe.

Ninelle has undoubtedly shown her talent in several positions in the entertainment industry, including as a member of the jury at Miss Ukraine California (The Best by Russian-Speaking Community Business Awards Ceremony). She was made a member of the jury following her feat at the Miss Sapphire Miami beauty pageant, winning the 2018 edition of the contest.

Miss Sapphire World is an international beauty contest organized to add value to woman's self- fulfillment as proof of the fact that beauty will save and improve the world. The 2022 edition of the beauty contest was held in the atrium of the Grand Hotel Emerald on the 20th of July. Participants took part in the implementation of an important environmental project of the city in line with the goal of the contest. The beauty contest is held on three continents - Europe, Asia, and America, with the first-ever edition successfully held in the USA, in Kimpton EPIC Hotel (Miami) in 2018. It has grown to become a much-anticipated event, featuring notable guests from all walks of life, including fashion and show business celebrities, politicians, and global business representatives. Miss Sapphire World has also attracted gib names sponsors with the likes of Rolls Royce, Herve Leger, Ursa Digital, BCBG South Beach, Area 31, and Epic Hotel, supporting the contest.

For inquiries or corrections to Press Releases, please reach out to EIN Presswire.
✕
× Close Ad